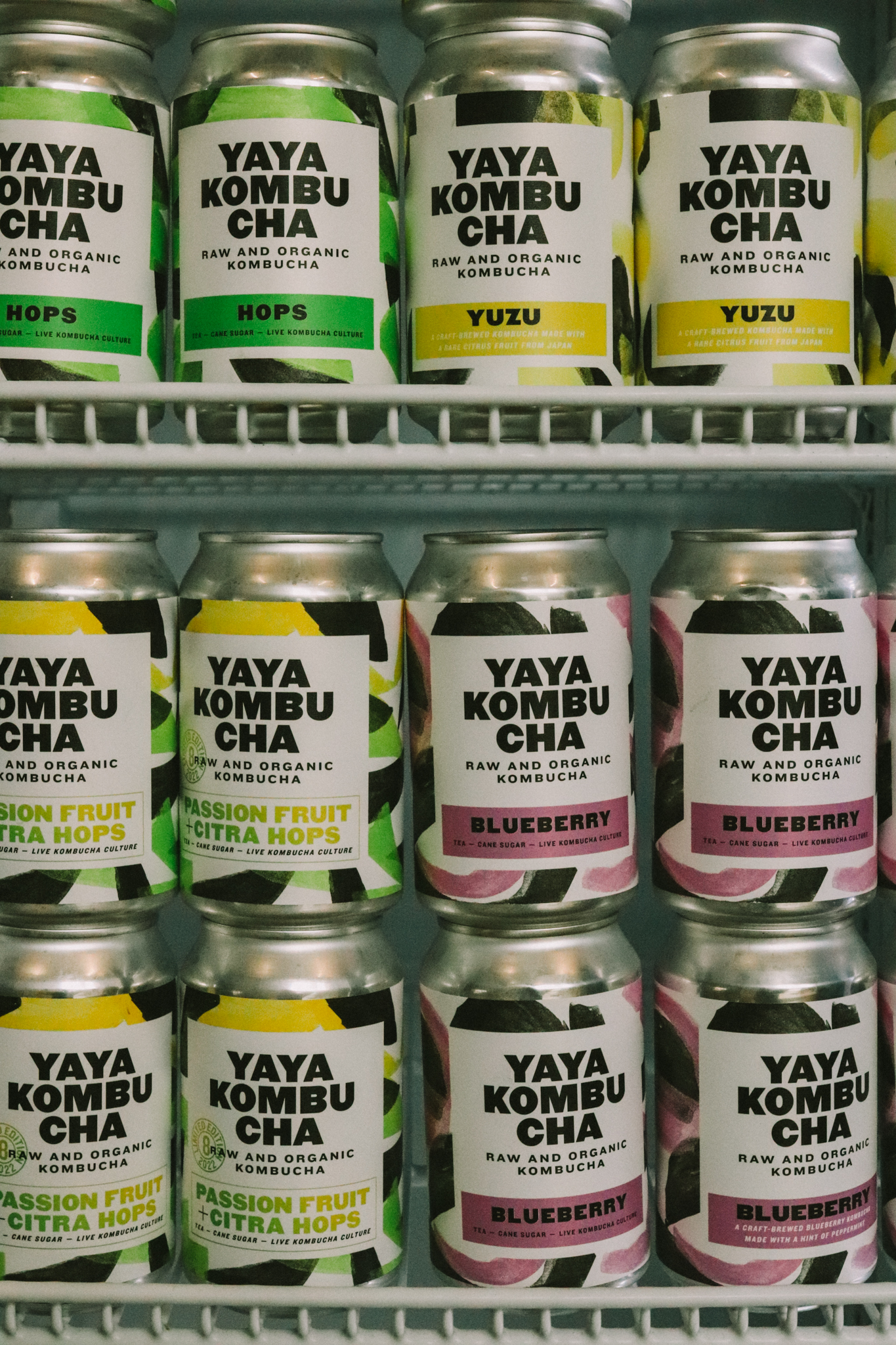 It’s now summer! So, in preparation for this season we decided to bring something fresh to the SB menu! Introducing YAYA Kombucha, a kombucha business that has grown exponentially over the past five years. They have definitely been on a journey, from starting by brewing in their own kitchen, to upscaling to their own brewery just outside of the centre of Amsterdam!

We met up with our friend, and co-founder of YAYA Kombucha, Charlotte Krijger, as she helps us delve into exactly what kombucha is, debunk some of the kombucha stereotypes and helps us see why kombucha is one of the most exciting products to enter our menu, and the drinks market today!

So Charlotte, if you’re someone like me who doesn’t know much about it, what is kombucha? And, how did you come to start making it?

So kombucha is a two thousand year old drink! It is a tea based drink so kombucha is something made of, well, we use black and green teas but you can work with any type of tea. It is then fermented and because of the fermentation process, it is first of all less sweet and it has a very nice crisp, freshness to it because of the sours that are created because of fermentation. It originated in China and it is still the biggest and oldest tea producing country in the world! From there it travelled to the West, and it ended up in the U.S It’s super popular there especially in California where it’s hot.

This is where Tom, my partner, discovered it for himself ten years ago! Tom and I both have backgrounds in marketing and a few years ago, Tom travelled a lot for work. He worked for adidas and he used to travel the world, specifically in relation to adidas and the tennis industry. When Tom was in California one time for some photoshoots, he noticed that most people were drinking kombucha. Tom being from here, he never noticed kombucha before and he was curious. It was just something that we had never seen before. When he came back home to the Netherlands, he discovered that it was barely available at home so we started home brewing. We began to like the kombucha because of the taste, and we now love the drink because it’s something you can brew at home; but also of course it’s what we now do on a professional scale.

So, the basis of kombucha is that it is tea that has been fermented?

We need the sugar because it’s the source of fermentation. Without the sugar it will not ferment, it will become a moulded tea! The fermentation process is kick-started by the culture of bacteria and yeast; similar to winemaking and beer making. However, our kombucha is unique as we cultivate our own bacteria and yeast, it is not something that we buy from a big company like, for example, beer breweries. It gives us our brand a different flavour than any other kombucha that is being made because it is something that has originated from this very location!

Within a period of five to six weeks, this very bitter, and sweet tea transforms into kombucha. If you taste the original kombucha flavour then you will recognise that it’s a very tea-like drink, but it has a little bit of fizziness because of the fermentation process as well. It naturally gets fizzy because of the process of CO2, but we do add a little bit of fizziness to it ourselves. After a while, a lot of the sugar disappears and forms into different types of acids, which is what we call the natural kombucha flavour. After we have this basis, we have a ton of recipes such as the Yuzu and Ginger flavours that you stock! We can work with any type of fruits, herbs or florals, and this is how you create all different types of flavours.

Do you have something that inspires you as a business? Something that fuels your creative ideas for the kombucha?

Well I think a lot of people love our brand from feedback that we have received and to be very honest it’s the thing that gets us going, as well as of course being creative with it. Most people are new to kombucha and are happily surprised! We don’t want to be just a production company, but we also want to always be challenging the standard in the soda industry.

When we started with kombucha it was…still a lot of people are not familiar with it. Maybe they have heard of it but never tasted it so it’s something that needs a lot of explanation so to say! But, we wanted to appeal to some people that drink it, or smell it for the first time, but are not sure what they’re drinking. Usually people who have never tried it before ask if it is alcoholic because of the fermentation to it. It’s not alcoholic, but it is something that people have to drink a couple of times for them to understand what it is, whether they like it, whether it’s an alternative to alcohol or even to coffee.

Well stocking it in Screaming Beans definitely gives people the opportunity to discover this! But would you say that kombucha and coffee are a good pairing?

Yes of course! When we first launched our brand in the first month, we were at the Amsterdam Coffee Festival in 2017 and we had a lot of fun there! This is when we decided to be there every year, and this is ultimately where we created the link with specialty coffee. I think if you are a person that visits a specialty coffee place like yourselves, then you must love good coffee!

Whether you sit in or takeaway, it is something that you appreciate in the craft and the background where it comes from. I think there are a lot of similarities in our product as there is a lot of craft that goes into our product and how we create it too.

What’s more is that if you have a really nice coffee bar and you’re sitting there with a book, or talking to a friend, or working, sometimes you sit there for a while. You don’t want to be rude and not order anything, and after maybe two coffees you’ve had enough. So I think kombucha is great because it’s very refreshing and the sourness is a very good palate cleanser after coffee! So yes, we’ve learned that kombucha is a very good match with coffee, and we’re excited that Screaming Beans have decided to stock it!

Are you ready to cleanse your palate and taste the refreshing taste of YAYA Kombucha? Well, good news! We now stock YAYA Kombucha Ginger, and YAYA Kombucha Yuzu flavours in store! Come get yours today while it’s still cold 😉

Coffee of the Month: July

Coffee of the Month: August